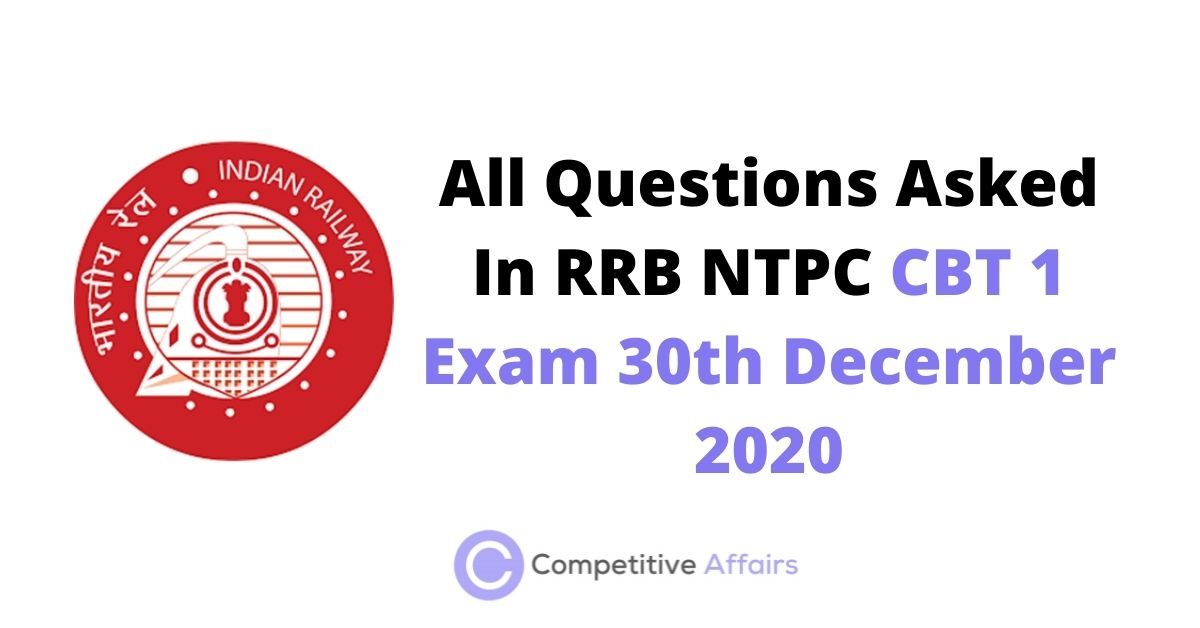 All Questions Asked In RRB NTPC CBT 1 Exam 30th December 2020– The RRB NTPC question paper for the 30 Dec 2020 exam is now available. You can check it for shifts 1 and 2 from this post. RRB NTPC 2020 CBT 1 exam has commenced from 30th December 2020 giving a great opportunity to students in India awaiting the job of their dreams. Competitive Affairs has always believed in helping our students in the best way. In this post, we will provide you the questions asked in today’s shift of the RRB NTPC 2020 CBT 1 Exam.

• Common Wealth Games 2022 will be organized at? Ans: Birmingham, United Kingdom
• When did Demonetization take place? Ans: 8 November 2016
• Who was the founder of the Slave Dynasty? Ans: Qutbuddin Aibek
• Which is India’s Air Space-Based Augmentation System? Ans: GPS Aided Geo Augmented Navigation (GAGAN)
• Administrative capital of South-Africa is Ans- Pretoria
• ‘Ryotwari System’ when started and where? Ans: Madras and Bombay areas, as well as Assam and Coorg provinces in 1820
• What is the other name of Mahavira Zoji La Pass? Ans: It connects Ladakh to Kashmir Valley.
• Dachigam National Park is in which state/UT of India? Ans: Jammu and Kashmir
• HQ of OECD? Ans: Organization for Economic Co-operation and Development is an intergovernmental economic organization with 37 member countries, founded in 1961 to stimulate economic progress and world trade. HQ- Paris, France
• FIFA 2022 will be held in which country? Ans: Qatar 2022
• Who is the author of Mricchakatika? Ans: Sudraka
• What is the other name of Mahavira? Ans: Vardhamana or Kevala
• Which among the following is not abiotic? Ans: Green Plants
• Who is the CEO of dream11?Ans- Harsh Jain
• In which state the Nipah Virus outbreak took place? Ans: Kerala in 2018
• Trackball is a device. Ans: Input device
• What is the full form of DHCP? Ans: Dynamic Host Configuration Protocol (DHCP)
• Which state is the Highest producer of Gold? Ans: Karnataka
• Operation Greens is related to? Ans: Project approved by the Ministry of Food Processing Industries with the target to stabilize the supply of tomato, onion, and potato crops in India
• When was the congress party formed? Ans: December 1885
• When did swachh bharat abhiyan start? Ans: 2014
• What is the chemical formula of Methane? Ans: CH4
• Olympic 2021 will be held in which country? Ans: Tokyo, Japan
• How many bytes are in 1 Kilobyte? Ans: 1024 Bytes
• Who is the present finance commission chairman of India? Ans: N K Singh
• Which is the 29th state of India? Ans: Telangana
• What is a trackball in a computer? Ans: a trackball is a pointing input device
• In which state Vidhan Parishad is not present?
• Big bang theory propounded by whom? Ans: Georges Lemaître
• Which water com rail bridge connects Assam and Arunachal Pradesh? Ans: Bogibeel Bridge
• Where is the headquarters of OECD? Ans: Paris,
• France which of the following is not invertebrate?
• Who is the Governor of Telangana? Ans: Tamilisai Soundararajan
• What is the name of Upper/Lower Jaw Bone? Ans: lower jaw (mandible), The upper jaw (maxilla)
• What is the name of the pass joining Srinagar and Leh? Ans: Banihal Pass
• Who is the writer of “The Republic”. Ans: Plato
• Who discovered the cell? Ans: Robert Hooke
• Who was the president of the first congress session? Ans: Womesh Chandra Bonnerjee
• Nobel prize is given in how many fields? Ans: 6
• What is the SI unit of Force? Ans: Newton
• Who is the founder of Facebook? Ans: Mark Zuckerberg
• When did the Nobel Prize start? Ans: 1901
• Classical dance of Andhra Pradesh? Ans: Kuchipudi
• Fundamental Rights is in which part of the constitution? Ans: Part 3
• Construction of Tajmahal was completed in which year? Ans: 1648 AD
• How many members are there in Saarc? Ans: Eight Members
• Afghanistan, Bangladesh, Bhutan, India, Nepal, Maldives, Pakistan, and Sri Lanka.
• Dahej Pratha ka adhiniyam?
• Who was the founder of Ghadar Party? Ans: Sohan Singh Bhakna and Lala Hardayal
• Which is the latest nuclear power plant in India? Ans: Kakrapar
• In which year the Aryabhatta satellite of India was launched? Ans: April 19, 1975
• How many countries have Veto power? Ans: Five, five permanent members of the UN Security Council (China, France, Russia, the United Kingdom, and the United States)
• How many states and union territories of India have sea coast? Ans: 9(state) and 4(UT)
• Total Number of seats in Rajya Sabha? Ans: Maximum 250 At Present 245, 233 members represent the States and the Union Territories, and 12 members are nominated by the President.
• When did Beti Bachao Beti Padhao Abhiyan start? Ans: 2015
• Golden Quadrilateral scheme initiated by which PM? Ans: Atal Bihari Vajpayee
• Beti bachao beti padhao scheme launched in which year? Ans: 2015
• Which country is declared malaria-free by who in 2019? Ans: Algeria and Argentina